Cortisol is known as a primary stress hormone in the system that is responsible for fight-and-flight responses as well as generating other chemicals when humans react to stress1. A vast array of factors contribute to the rise of cortisol in the body, and chronic elevation of cortisol levels is detrimental to human health (e.g, constant stress exposure2,3, overloaded work2, sleep issues3). With regards to sleep, cortisol levels can be affected by many simultaneous factors as well (e.g, sleep disturbance3,4, early waking4, depression5, early stress in the day5 and several other psychiatric disorders like PTSD6).

Two important markers of cortisol secretion will be discussed: Cortisol levels upon awakening (CAR) from each polyphasic sleep block and overall cortisol regulation throughout a day on a polyphasic schedule.

Like other hormone secretions, cortisol also goes through a cyclic secretion period marked by the normal 24 hour circadian rhythm. Cortisol is secreted from the adrenal cortex and is heavily tied to the HPA axis, which holds a pivotal role in controlling the stress response system6. Under normal, uninterrupted nocturnal sleep conditions, cortisol levels drop to very low during the first half of the night (during SWS) and coincidentally rise during the second half of the night (during REM), which is a few hours before awakening; upon awakening, cortisol concentration remains high for another 30-45 minutes in healthy individuals6,7,8. After this brief rise, during the rest of the day, cortisol secretion drops to very low levels9; CAR, however, is found to be unrelated to cortisol secretion during the day7.

Regarding sleep architecture, one study claimed that sleep stages do affect CAR because of rhythmic periodicity6. Specifically, the difference between a REM wake and an NREM wake (light sleep) affects the magnitude of CAR, owing to the preactivation of neocortical networks and associated memories6. However, given the small sample size of the study, it is currently not conclusive whether only REM sleep causes cortisol to rise, as well as how sleep stages affect cortisol concentration, especially when a polyphasic sleep regime is endorsed. Another study postulated that cortisol levels are minimal during SWS10, which is consistent with the other conclusions from the studies on cortisol levels during the first half of the night.

A lot of studies have analyzed how cortisol levels can change during sleep deprivation periods (whether short or extended), as a result of sleep disturbance and poor sleep quality. Sleep deprivation across these studies were mostly under drastic reduction of nocturnal monophasic core sleep or prolonged wakefulness periods (staying awake for extended periods of time). Although the comparison of sleep deprivation under these conditions and under polyphasic sleep adaptation appears to be similar (partial sleep deprivation), the final conclusions remain unclear when adapted polyphasic schedules are taken into account (polyphasic schedules that reduce total sleep spent in bed compared to individual monophasic baseline).

In a study of 10 healthy males (aged 19 to 27), the lowest point of cortisol secretion is from 23:00 to 03:00, and highest point (peak) is from 07:00 to 11:0010. This inconsistent data from regular cortisol secretion pattern with sufficient nocturnal sleep (CAR only persists for 30-45 minutes upon awakening) results from 40 hours staying awake before an unlimited nocturnal sleep (no alarms, laboratory environment). This implies that one recovery night sleep may not be sufficient to restabilize cortisol levels. However, more implications about cortisol secretion during sleep deprivation shows a lot of interesting findings.

Despite the prediction that CAR would steeply increase during waking hours after at least a night of partial sleep deprivation, several studies have shown otherwise – cortisol levels are “blunted” upon awakening11,12,13. Surprisingly, cortisol rise is delayed and instead only sharply increases in the evening1,11. There is also inconsistent data on CAR peaks across studies on sleep deprivation, because numerous factors (e.g, timing of awakening from sleep, sleep stages, lack of sampling before and after awakening, insufficient sample sizes) are not fully understood or thoroughly explained. Extended sleep deprivation periods are also known to keep cortisol levels elevated during waking hours until a negative feedback (upregulation) within the HPA system occurs (when sleep is initiated)14.

Regardless, the changes in cortisol secretion pattern under sleep deprivation (akin to polyphasic adaptation) is a concerning matter. There are different polyphasic schedules with very different sleep-wake hours, even though the standard variants focus on as much nocturnal sleep as possible. It is possible that cortisol secretion patterns during sleep deprivation from polyphasic adaptation are messy and unpredictable. However, currently, there is no data from the community that directly measures CAR intensity as well as daily cortisol peak and trough concentrations.

So far, there have been few studies between CAR and polyphasic sleeping. This section will analyze four polyphasic-related studies and attempt to correlate how these polyphasic sleep experiments alter CAR activation and cortisol secretion patterns. As usual, the explanations from these studies do not provide enough evidence to apply across all polyphasic schedules and all polyphasic sleepers. 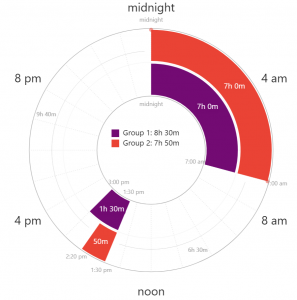 The first part of the study explores whether CAR is present after a nap is taken and whether nap duration, timing of naps in the day and sleep architecture are involved in activating CAR5. However, the following aspects need to be noted:

NOTE: The napchart in Figure 1 is only an illustration of the subjects’ sleep patterns. Start of night sleep and wake of morning sleep are likely to vary by a decent margin. There is no pre-existing sleep deprivation period or any nocturnal sleep restriction done before the experiment, so Siesta-extended (non-reducing type) is assumed for consistency with the nomenclature of polyphasic schedules on this website.

Results from this study demonstrated that there was a period of nCAR upon the 90-minute naps, but not 50-minute naps (nCAR is understood as cortisol increase as a response to napping). One possible explanation is that the 50-minute naps are too short to induce an nCAR, while 90 minutes, which is considered a “core” in the polyphasic community, is long enough (contains all vital sleep stages). nCAR found in the study exhibited similar behavior to CAR from nocturnal sleep (30-45 minute rise in cortisol levels upon awakening). However, nCAR’s size is twice as small as CAR size from nocturnal sleep (given nocturnal sleep duration is a lot longer than a nap).

Interestingly enough, it was found out that cortisol secretion levels from 50-minute naps were drastically higher than those from 90-minute naps. The explanation provided by the study is that 90-minute naps contained all sleep stages (higher percentage of REM/SWS) and were long enough to suppress cortisol secretion during sleep, which in return caused low cortisol levels upon awakening. 50-minute naps by their structure contained a higher percentage of light sleep and only a small amount of SWS, so they did not last long enough to fully suppress cortisol levels during sleep. 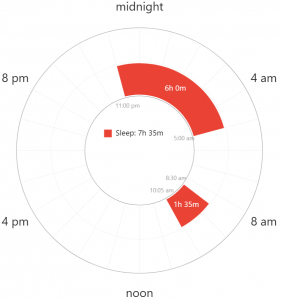 The results showed that the 90m sleep around dawn also consistently resulted in an nCAR. The sleep duration around dawn is known to be REM-heavy (especially once adaptation is completed); the subjects did manage to get more REM than SWS in the second core, either with or without Zolpidem administration. It was confirmed that timing of sleep and sleep duration play a role in generating nCAR and CAR instances, which is consistent with another study9.

Sleep architecture (from previous findings) shows that NREM1 and NREM2 potentially increases HPA axis’ activity during sleep, resulting in a higher cortisol levels upon awakening. Sleep stages, circadian timing and sleep duration are important factors to be considered, as all of them are contributors to creating nCAR(s) and increasing cortisol levels. Full-cycle sleeps (90 minutes) seem to produce CAR and nCAR(s) because of the length, but the same do not apply to smaller naps (50 minutes and shorter). However, it also currently cannot be confirmed whether a fully repartitioned short nap (e.g, 20m REM nap around dawn) is equivalent to 90-minute variants or not. More long-term studies on sleep stage repartitioning on more extreme polyphasic schedules are necessary to make further correlations about how cortisol levels are regulated on these sleep regimes. 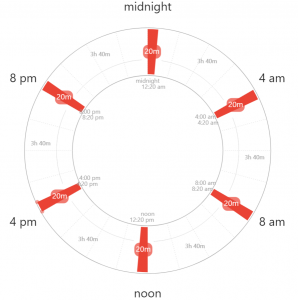 This is one of the few studies on an extreme polyphasic schedule as well as its related endocrine and cognitive effects on the human mind. Another relevant assessment is the mentioning of cortisol level before and after the experiment. The study is consisted of the following important points15:

NOTE: The napchart above illustrates how the Uberman schedule is defined and does not reflect the accurate sleep times of the subjects in the study. Unfortunately, all information about this study’s results and analysis is not available yet. No specific data could be accessed to show how cortisol level changed throughout the course of 5 weeks. Only the Abstract section is accessible up to date. Thus, most of the remaining explanations and correlations are speculative. 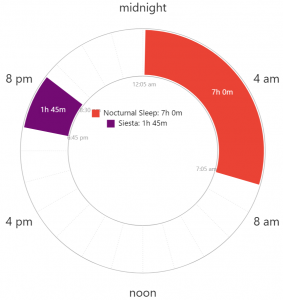 NOTE: Since there was no mention on how much sleep the students got each night, the nocturnal sleep in the napchart is only an illustration.

A few pointers to note for this study16: 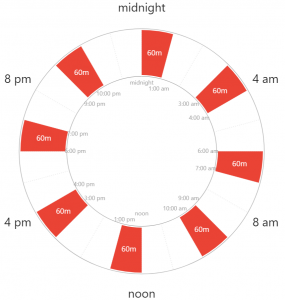 The following details regarding methods and preliminary information are to be noted in this study18:

The four studies present more questions than answers about how CAR is affected by certain factors and what the most dominant factor in creating CAR instances is. The first and the third studies both tested a long sleep duration (at least 1 full cycle, 90 minutes long) yet results were contradictory. However, the conclusions drawn from both studies were consistent – it is suggested that timing of sleep and circadian rhythm can affect whether a CAR can be created, even if sleep duration is the same. These two studies along with the fourth study shared a common ground: sleep blocks with a high REM percentage often result in a CAR instance. The process of waking up and sleep stage composition are interesting topics to be explored, as they appear to be suspecting factors for CAR’s occurrences. The final verdict remains unclear – it is not known if a specific sleep stage at different times of the day is involved in CAR. The second study on Uberman sleep sparked some insights into whether a polyphasic adaptation is possible, and the results of stable cortisol secretion pattern seem to support the notion that a successful polyphasic adaptation can stabilize cortisol levels.

There have been a lot of contradictory findings on cortisol secretion and CAR mechanisms. Several factors have been posited to affect how cortisol is released and how much cortisol can be produced. The general consensus is that cortisol levels rise prior to awakening in the morning and are generally kept low during the day, but this seems to vary on polyphasic patterns during the adaptation period. Speculatively, successful polyphasic adaptation would result in a consistent secretion pattern of cortisol and CAR instances – however, the current sample sizes from the polyphasic sleep studies are too small to draw a broad conclusion.

View all posts by Polyphasic →

The Forbidden Zone of Sleep

A Method to Sleep Polyphasically Without Alarm Clocks