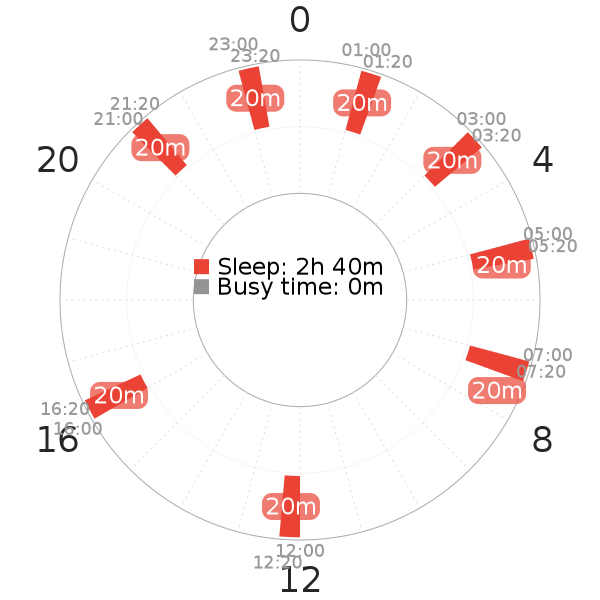 The name SPAMAYL is an abbreviation of “Sleep Polyphasically As Much As You Like”. This schedule will likely be below the minimum sleep threshold of most people, and adaptations to it are extremely rare. Having 8 or even 12 naps spaced throughout the day gives little leeway for productive work between naps, and eating times need to be carefully planned out and so forth. People without reduced sleep needs are therefore advised to avoid this schedule.

Stocking up sleep in a day then having few or even no naps the next day is reportedly possible on this schedule. However, the ability to do so strongly questions the possibility to get all needed SWS and REM, as stocking up on those sleep types is not possible, which suggests that the people who were able increase their sleep times were still sleep deprived. Strong reliance on the ability to detect when the need to rest is required in order to get quality naps. This schedule has at least 1 SWS nap, and several naps can contain mixed-stages. SPAMAYL can be stabilized and formed into a rhythm if one has a stable work/schedule everyday (set nap times, like a 2-hour rhythm, napping once every 1 hours and 40 minutes at night for example).

For what lifestyles is this schedule best?

SPAMAYL fits those with self-employment, working from home, but is also possible for programming jobs, having stable daily schedules. For those who have gotten used to 20m naps, there is allegedly no limit in SPAMAYL’s flexibility.

Why does this schedule work?

The schedule is based on the entrainment of 20m naps, napping for 20m when one is tired enough. Since there are no core sleeps, all necessary SWS and REM must come from the naps. Like with Uberman and Dymaxion, an SWS nap can be experienced during the REM peak, and REM nap during SWS peak. Sleep pressure is usually huge since SWS and REM have to be repartitioned into all naps, and one cannot predict which sleep type each nap can have, due to the varied number of naps each day. However, SPAMAYL is less hostile than Uberman and Dymaxion, since it can allow more than 6 or 4 naps respectively, and the extra sleep from the extra naps will help accommodate sleep need more easily, allowing for extra REM and SWS gain. However, because the naps are being moved they will contain a lower amount of SWS or REM than the naps of strict nap-only schedules, thus requiring more naps to give the same total SWS and REM sleep. It’s likely that only adults with genetically reduced sleep needs will be able to accomplish this type of sleeping pattern, due to the inefficiencies of inconsistent sleep times and the very low sleep total.

Rasmus, the inventor of the schedule, said he never felt tired and once he was tired enough he would lie down and take a 20m nap. Like other schedules, REM naps give huge boost to alertness and naps are usually very deep if they are well-timed, because the schedule doesn’t offer any core sleeps. However, it is also common to feel tired occasionally if a nap is ill-timed or if one has to stay awake for too long.

What variations of SPAMAYL actually work?

According to Rasmus, most naps are focused in the night, because it is usually harder to stay awake at night than during daytime. Adapted Discord user Charlaxy also reported the majority of naps at night after 8-10pm through early morning before 7am. Usually, nighttime naps allow for SWS gain and make sure one gets some night sleep, and limiting daytime naps to ensure that one can have a (reasonably) comfortable social life. However, this isn’t the only variant of SPAMAYL that can work. Since SPAMAYL has so much versatility in scheduling and can manifest in a vast array of forms for an adapted person, there is no limit on any number of SPAMAYL variants that could work.

What is the best adaptation strategy?

According to Rasmus, “during adaptation one can go nap for 20m, wake up (and actually do things rather than just sitting in bed) for at least 20m and after at least 20m passed by, if one still feels sleepy they can go back to sleep for another 20m and rinse and repeat. Over time, the quality of the naps will improve, and they will alleviate a greater amount of homeostatic pressure, allowing people to stay awake for longer because of a higher percentage of REM and SWS in the naps.” However, this adaptation scheme by Rasmus is debatable in that humans usually need to stay awake for at least 90m (one full wake cycle) before sleeping again, otherwise the body will treat it as an interrupted core sleep. What is important is to make sure that you actually only take 20 minute naps and that you space them apart adequately, so that you’re actually being awake between them, which is a more sensible reasoning. The recommendation can therefore be made to not schedule the sleeps at a closer interval than 90 minutes between the naps.