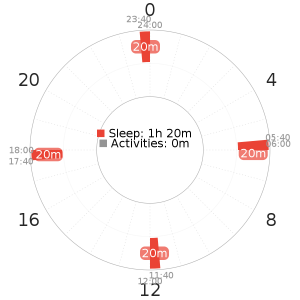 Tesla is an extreme schedule designed by Sharif Olorin in 2009 that combines parts of Uberman and Dymaxion. It consists of four equidistant 20 minute naps (one nap every 6 hours) and no cores, allowing for a total of merely 1 hour and 20 minutes of sleep a day.

While Tesla was documented to sleep less than most people at night, this schedule was actually not practiced by Nikola Tesla. It got named after him by the creator. Here is what Sharif Olorin had to say about the naming:

“A friend of mine has recently switched from Dymaxion to the pattern I’m following. Now that I know of more than one success story with this pattern, I thought I’d better name it.
So I give you the Tesla pattern. Because a) Tesla’s awesome and b) Tesla’s one of the few people known to sleep almost as little as we polyphasers.”
– Sharif Olorin, 2009

Tesla is not considered to be a sustainable schedule. The creator of the schedule and his friend supposedly adapted to it for a short time. Feeling of restfulness on nap-only schedules can be misleading due to sudden changes between restfulness and extreme tiredness. It possible that the both of them mistook the prolonged feeling of restfulness for adaptation while, in fact, they were still in the adaptation phase.

Even if the schedule was viable, it would likely take someone with extremely low sleep requirements to complete the adaptation. The basic adaptation experience would be along the lines of Uberman, but far more intense. Since the schedule was originally created, there have not been any noted adaptations during which people sustained the schedule for a prolonged period of time. For these reasons, this schedule should only be considered by people who have succeeded in adapting to at least one other nap-only schedule before; being way more difficult than Uberman.